He was drafted by the 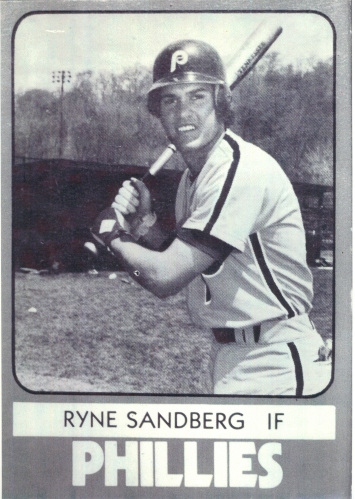 Phillies in 1978. He spent 1980 in Reading. He’s a Reading Baseball Hall of Famer. His number is retired in Reading. Who is he?

His name is Ryne Sandberg and he’s back in the Phillies organization.

Earlier today, the Phillies announced that MLB Hall of Famer Ryne Sandberg will be the manager of Triple-A Lehigh Valley in 2011. And, while the R-Phils will have a new manager in 2011 too, and, while I would have loved to see the former R-Phil back in Baseballtown, the fact that he is back in the Phillies organization is a huge plus — even if he’s not in Reading.

Let’s check out the press release straight from Philadelphia:

Sandberg, 51, spent the last four seasons as a manager in the
Chicago Cubs’ minor league system with Class-A Peoria (2007-08),
Double-A Tennessee (2009) and Triple-A Iowa (2010). He led his clubs to
two first-place finishes and, overall, has a managerial record of
284-277-1 (.505). This past season, his first as a triple-A manager,
Sandberg was named Manager of the Year in the Pacific Coast League
after leading the Iowa Cubs to a tie for the best record in the
Northern Division (82-62).

The remainder of the Phillies’ 2011 player development staff will be announced at a later date.

Eleven years later, Sandberg was elected to the Reading Baseball Hall of Fame — the same year Dallas Green was elected. Green, of course, is currently the Philadelphia Phillies Senior Advisor to the GM. On July 2, 2006, Sandberg’s number 26 was retired by Reading.

Sandberg was a great player, and has done a very good job as a manager at the Minor League level, and this moves makes a lot of sense for him.

Earlier today, in a conference call, the former R-Phil had this to say:

“I see this as a tremendous opportunity,” said Sandberg, who also
interviewed for the Boston Red Sox Triple-A manager job at Pawtucket.
“I’m going back to my roots where I learned to play the game as a
major-league player. In a lot of ways, I feel like a young kid again. I
couldn’t be happier about the situation.”