As I began to sit down

and write a new entry today, I found out some interesting news.

I just noticed that this blog was named as one of the Top 50 MLB Pro blogs. And, my photo is one of the ones featured on the www.mlblogs.com home page. I am ecstatic! It’s really nice to know that there are people out there who enjoy the things I write here. Thanks to all the readers, I appreciate everything!

Before I start to take a look at the first round of Phillies cuts, I wanted to share with you one more interesting tidbit.

Yesterday, before leaving the office for the weekend, I had a chance to take a look at the $10 million renovations to FirstEnergy Stadium with my fellow employees. Each day, I am more impressed. And, when fans get into the ballpark on Thursday, April 14, they are going to be impressed as well. Things are really moving along nicely. I can’t wait for Opening Night!

Nicaragua, posted a 3-4 mark with a 5.45 ERA for the R-Phils in 2010. Acquired in the Cliff Lee trade, along with Phillippe Aumont and Tyson Gillies, Ramirez will look to get back on track in 2011. He won his Reading debut and posted a 1-1 mark with a 3.81 ERA at home for the R-Phils. There’s a good possibility we will see J.C. in Reading this season.

with a 4.63 ERA for the R-Phils in 2010. The Aussie native finished second in the Eastern League with three complete games, and was solid at home — posting 8 of his 12 wins at America’s Classic Ballpark. Naylor appeared in one game this spring for the Phils, and allowed just one hit and one walk over 1.1 innings pitched. He also fanned three batters.

Two more days until Phillies Minor Leaguers begin play. Check back here each day, as well as www.readingphillies.com for all the latest spring news. There will be news and notes, as well as podcasts and more!

Welcome back to the “Philling You In” blog, and today we continue with the five-part blog series of the End of the Season roundup. Let’s take a look at some of the starting pitchers who competed in Baseballtown in 2010 — enjoy!

On Monday, September 6, in what was the final game of the season, Naylor tossed a complete game three-hit shutout in Altoona against the Curve. In his final two starts of the season, he posted a 1-1 mark with a 1.84 ERA. A member of the Philadelphia Phillies 40-man roster, Naylor fanned a season-high 11 batters on August 27 against the Binghamton Mets. He won three of his last four starts, and finished the year as one of the best starters on the R-Phils staff. 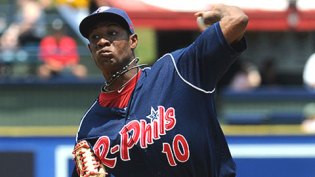 during the 2010 season, but finishedthe season on a high-note. The Dominican native threw seven solid innings in his final start of the season, en route to notching his tenth win of the year. During his final start, which helped lead the R-Phils to a 4-1 win over New Britain, Flande fanned a season-high 7 batters, and allowed just one run on seven hits. 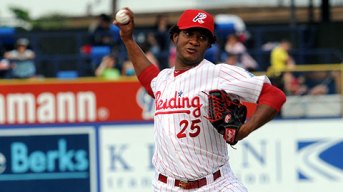 traded Cliff Lee in the offseason, and in return received three players who all spent time in Reading during the 2010 season. Ramirez, 22, was the one that made the most impact in Baseballtown.

A native of Nicaragua, Ramirez began the 2010 season with Clearwater (A+), and after posting a 4-3 mark with a 4.06 ERA, was promoted to Reading, where he would make 13 starts. Over that time with the R-Phils, Ramirez had mixed results. His best month came in July when he posted a 2-1 record with a 4.62 ERA, including one complete game.

The former Seattle product missed the final week of the season due to a hip injury, and while he recently had surgery to repair a torn labrum (cartilage) in his hip, he should be ready for spring training.

The 2010 Eastern League All-Star Game will

be played tomorrow (Wednesday, July 14) in Harrisburg, PA, and the Reading Phillies will be well represented.

When the original rosters were announced, four R-Phils were selected to the team (MIchael Schwimer, Vance Worley, Tagg Bozied, and Matt Rizzotti). As things change, and players are promoted, or injured, the rosters began to change — by the day.

Not too much later, R-Phils SS Freddy Galvis was added to the roster, running the total of R-Phils players to five. Then, Michael Schwimer, who was enjoying an impressive 2010 in Baseballtown, was promoted to Lehigh Valley. Wth Schwimer off the roster, starter Drew Naylor was added to take his place.

Yesterday, Kevin Mahar was added to the roster for Brandon Laird, who was unable to participate. Now, seven R-Phils in all were selected, and six will go to represent their club. An impressive number of All-Stars!

Vance Worley —
Worley, 22, makes the Eastern League All-Star team for the
second-straight season. The Sacramento, CA native is 8-4 with a 3.44
ERA over 18 starts this season. In the month of June, Worley went 2-2 with a 3.12 ERA (five starts). Originally selected by Philadelphia
in the third round of the 2008 draft, Worley is the reigning Eastern League Pitcher of the Week, after tossing a complete game, three-hit shutout on July 11..

Tagg Bozied —
Bozied, 30, is in his first season in the Philadelphia organization,
and has excelled at the plate this season for Reading. A native of
Sioux, Falls, SD, Bozied is currently hitting .293 with 13 home runs
and a team-high 55 RBIs. He, as well as Matt Rizzotti, will participate in the HR Derby.

Matt Rizzotti —
Rizzotti has enjoyed an impressive season in Baseballtown since his
promotion from Clearwater (A+) on May 13. The Floral Park, NY native is
hitting .355 with 12 home runs and 47 RBIs. This season, Rizzotti has already won such awards as — Eastern League Player of the Month (June), Eastern League Player of
the Week (for the week ending June 29), and Philadelphia
Phillies Minor League Player of the Month (May). Originally selected
by Philadelphia in the sixth round of the 2007 draft, Rizzotti, 24, is
hitting .379 with six home runs and 21 RBIs in the month of June.

Freddy Galvis —
A native of Punto Fijo, Venezuela, Galvis is hitting .221 with two home
runs and 30 RBIs over 89 games with the R-Phils this season. Originally
signed by Philadelphia as a non-drafted free agent on July 2, 2006,
Galvis has enjoyed a successful season at the plate, on the bases (eight stolen bases), as well as in the field for Reading this season.
He is ranked by Baseball America as the number 13 prospect in the
Philadelphia Phillies organization.

Drew Naylor —
A native of Brisbane, Australia, Naylor has posted an 8-6 mark with a
4.01 ERA over 17 games (16 starts) with the R-Phils this season. His
best game of the season came on May 25 at FirstEnergy Stadium. The 6’4″
Naylor threw a complete-game, three hitter, en-route to an impressive
6-0 victory over Portland. He allowed just one walk and fanned six
batters on the evening.

Kevin Mahar —
A product of Indiana University, Mahar has enjoyed a successful season
with the R-Phils in 2010. In his second-straight campaign in
Baseballtown, the 29-year-old is hitting .270 with eight home runs and
33 RBIs. The 6’5″ slugger has been red-hot in July – hitting .300 with
three home runs and ten RBIs.

The Month of May had its ups and downs for the Reading Phillies.

In 28 games in May, the club posted a 13-15 mark, and had some incredible wins, combined with some heart-breaking losses.

Let’s take a look at the Reading Phillies May Leaderboard:

SLG % — Brown had an impressive .622 Slugging Percentage, which led the E.L. 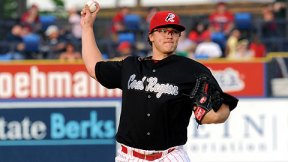 SHO — Drew Naylor had a complete game, three-hit shutout on May 25 against Portland.

First, they won five of seven games at home, beating the Portland Sea Dogs three of four, and the New Hampshire Fisher Cats two of three. They then took to the road, and well, the road was not kind. They dropped five of six on the road, before coming home to drop four of six at home. They closed out April losing to the Fisher Cats in New Hampshire on April 30.

Let’s take a look back at the Month that was, as we take a look at the hitting and pitching leaders… 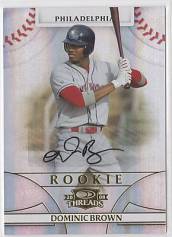